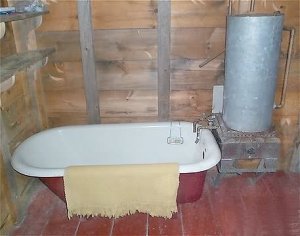 In the summer of 2002 I took a trip with my future ex-wife to a cabin in the Adirondack Mountains of New York. This cabin is one of several on 700 acres near the town of Jay, called Four Peaks. It is run by a man named Martin Schwalbaum. Martin is a transplanted Jew from Brooklyn and he has created a beautiful escape over 40 years, one cabin at a time.

I was living in Manhattan at the time and had just finished my first year of seminary. More importantly I had just finished a full summer of clinical pastoral education. CPE, as it is known, is a summer program for people interested in becoming a priest. The theory goes, if you want to be a priest you are going to see a lot of people who are sick and dying, so you might as well get used to it now. I spent 40 hours a week plus on-call at Columbia Presbyterian Hospital in Washington Heights.  It’s sort of like a boot camp but instead of preparing to kill people, you are preparing yourself to watch lots of people get sick and die. More on that story in another post. Needless to say when I showed up at Four Peaks I was exhausted and ready for a break.

Four Peaks is one of those places in the world that you can truly get away, there is no electricity to the cabins, no running water and no phones. There is a limited gas supply and to get water you have to hand pump it from the ground.  The beauty of the place is that it is far away and you are in the mountains.

I heard Martin Schwalbaum before I met him face to face.  He was coming up the road to the small  cabin I was staying in, yelling at his dog George.  Through the silent trees came a Brooklyn accent echoing through the four peaks,  “God damn it George, get in the fucking car” “What the hell are you doing?” “George, George, George, God damn it…” And so on.

On the second night of our stay the pilot light under the hot water tank went out. The hot water tank was a large metal tub inside the cabin with a burner underneath. The whole thing reminded me of a moonshine still. That evening all I wanted was hot water for a bath, and not having any way to contact Martin to come and fix the pilot light, I decided to try and fix it myself. I got down on the floor and found what looked like the most obvious place for gas to enter the burner and started flicking a lighter into that spot. Nothing happened. Nothing happened for the next hour that I tried to get the burner back on. Finally I gave up and went to bed dirty and frustrated at my inability to accomplish this very simple task.

The next morning Martin came by for his daily check in. I stopped him and explained what I had done the night before and asked him if there was some trick to relighting the pilot light. He looked at me in the way you might expect a hunter to look at a wounded animal they are about to put out of its misery.  He then said some of the most important words anyone has ever said to me, so important that I wrote them down in the cover of the book I was reading with the date so that I would not forget them. He looked at me and said “At this point I am convinced that you have absolutely no fucking idea what you are doing.” He went on for a while after that… explosions…killing everyone…stupid…fires…why?… After he was finished I was pretty sure that I was just lucky to be alive.

What Martin said to be has been extremely useful to me. There are times, for all of us, that we really don’t have any idea what we are doing. It fact, most days I believe we go about our lives trying to convince everyone that we have it all together when in reality we are just lighting a flame near a gas source and hoping something will light and that we won’t get blown up in the process.  Sometimes things just don’t light and sometimes we do blow things up and sometimes the burner lights and we can heat the water.  I’m just hoping that at the end of my life I can look back and see more hot baths than explosions.

I am a priest in the Episcopal Church in the Diocese of Oregon. I am currently the rector of Christ Church, Lake Oswego, OR
View all posts by fatherjeremy →
This entry was posted in Uncategorized. Bookmark the permalink.