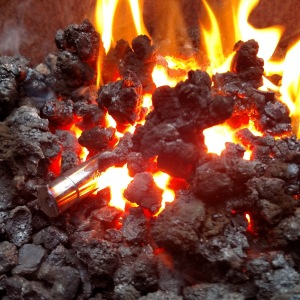 Yesterday a small group of people came together to participate in an act of holy foolishness. It was a symbolic act meant to continue a conversation about how we have normalized gun violence in our country. For those gathered this was not a political statement, it was a spiritual statement of our Christian faith. We took a weapon designed to kill human beings, an AR-15 semi-automatic assault rifle,  and turned it into a tool for cultivating and growing food. Our friends Mike and Fred Martin of RAW Tools 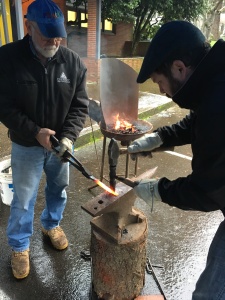 Mike Martin and his father Fred Martin of RAW Tools

in Colorado traveled to Portland and brought their skills to create a tool that will be given to the Newtown Action Alliance on the 4th anniversary of the Sandy Hook massacre. We did not destroy this gun because we thought it would be an effective way to end gun deaths. Although this gun will never be used to kill anyone, it would take almost 1000 years to destroy just the guns in the United States right now using our method. We destroyed this gun to highlight the idolatry with which we worship guns in America.

As those gathered together to follow Jesus Christ we are called to stand for more peace and less war, more care for others and less selfishness, more generosity and less greed, more hope and less violence. We are called to be evangelists for the nonviolent Way of Jesus. Yes we live in a complicated world, yes certain weapons keep us safe as a country, yes there is evil that would harm other people, but we cannot allow the fear of violence keep us from looking for another way. Our actions are meant to wake people out of their complacency around gun violence in our country and open space for new, creative and imaginative ways to live together.

We are two weeks from the annual celebration of the coming of the Prince of Peace. Christmas is the day we celebrate the coming of God into the world, and in turn a new way of life that compels us to see God in one another.  May each of us understand who we are called to be and live fully into the message of God in Christ.

There are still many questions about winning the AR-15 and the money used to buy the raffle tickets. Those questions were answered in this blog post a few months ago.

I am a priest in the Episcopal Church in the Diocese of Oregon. I am currently the rector of Christ Church, Lake Oswego, OR
View all posts by fatherjeremy →
This entry was posted in Uncategorized. Bookmark the permalink.